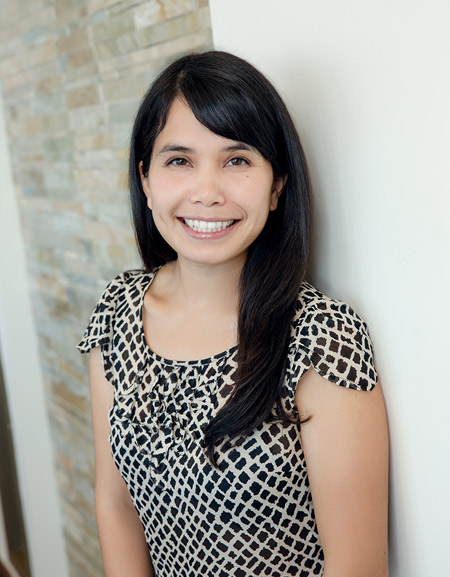 Where were you born and raised?
I was born in San Francisco, CA and raised in the San Francisco Bay Area. My father is Mexican and my mother Chinese, and I was raised celebrating both cultures.

What is the one piece of advice you would give your younger self?
I would warn myself that everyone is going to try to tell me what I need to do, and who I need to be, to make it in science: someone who is less sensitive and who spends a lot less time doing scientific outreach, mentoring and helping their friends with their projects. I would tell myself that being sensitive and caring about mentorship and the success of my colleagues is a major strength and that the template of a scientist will evolve. All of these things will contribute to my success (e.g., grants and fellowships that select for educational outreach or mentorship strengths).

Describe the moment when you knew you had to go into science?
My undergraduate advisor, Robert Sapolsky, researches stress and stress-related diseases. I found it fascinating how physical stressors, like a predator, and stressors that we impose upon each other, such as social stressors, can have such a profound impact on our health: from our immune system to the integrity of our hippocampus, which is a brain structure involved in memory.

I was particularly interested in how our subjective interpretation of our socioeconomic status and importance in our community (loosely defined) corresponded with our circulating levels of stress hormones. I did a small study aimed at testing whether participating in community service reduced circulating levels of stress hormones, which I was able to develop and implement completely independently. After that, I was hooked.

Describe an aha moment you’ve had in the lab?
I feel like many people become enamored with electrophysiology when they can see and hear something cool (through an audio monitor that converts voltage deflections to a sound) a single neuron doing, whether it be a response to stimulus or a cool temporal activity pattern. My colleague, Laleh Quinn, would become entirely unresponsive when she would see these GIANT beta oscillations in the dentate gyrus of the hippocampus, as if they completely took her breath away.

I have had a few moments like this: the first time I heard a place cell, when a neuron only seemed to fire when a rat sniffed me and when I was rhythmically stimulating the brain with a student and the frequency manipulation we were imposing caused the cells to do rhythmically predictable things.

What is one significant advance TDLC research has brought to the science of learning?
Multiple research projects in the center have contributed to the idea that there is a nested temporal organization of neuron-spiking activity in rhythms. In addition, research from the center has highlighted the vast influence of a single neuron. In other words, the activity of a single neuron has the potential to change the processing state of the entire brain.

What do you hope to accomplish in the next seven years?
I hope to identify the elements that contribute to rhythmically identifiable processing states: from the activity of specific neuron types (e.g. do certain neuron types help facilitate the temporal coordination of activity in the circuit?), to the behaviors that instigate shifts in the way neurons interact with each other, which has a huge impact upon the timing of their activity. In addition, I hope to translate the noninvasively recorded EEG signal to its underlying single neuron and local circuit processes.

What is your favorite TDLC value?
I was raised in the TDLC. I joined the UCSD Neurosciences Graduate Program during the first year of the TDLC and the collaborative structure of the center enabled me to construct a project that bridged the interests of two center labs.

Maybe it is generic to say that I appreciate the collaborative structure, but I think I mean it differently than most people do. I've been a member of other collaborative centers, and that traditionally means that people share ideas and resources.

The TDLC is full of people who see the connections, the bridges between labs and the advances that can be made when we can get certain groups working together on the same project. Then they raised a group of students, like me, who have research that is bridge work, the sort of stuff that is right in the center of interdisciplinary. I think science really needs bridge work right now, and the TDLC is full of visionaries for this exact thing.


Lara Rangel is an assistant professor in the Department of Cognitive Science. Her lab seeks to understand the mechanisms through which dynamic engagement between neural networks is achieved. She earned her PhD in neuroscience at UC San Diego.