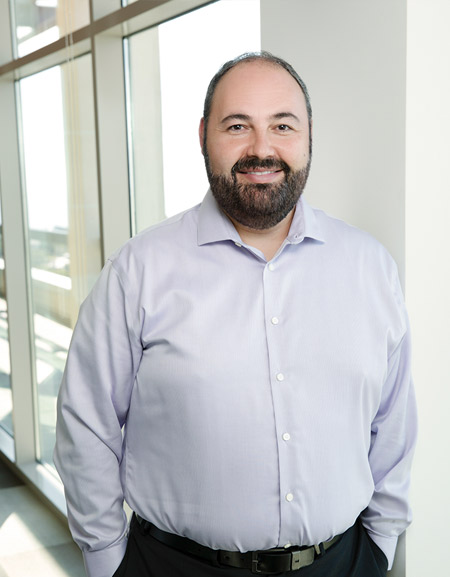 Where were you born and raised?
I was born in Edmonton, Alberta, Canada, but moved to Pittsburgh, Pennsylvania with my family at 5. Raised in The Burgh until I went to college. Returned to Pittsburgh for medical and graduate school.

What is the one piece of advice you would give your younger self?
Trust your instincts and take more risks.

Describe the moment when you knew you had to go into science?
Actually, I remember it pretty well. I was an undergraduate premed biochemistry major who was doing research in a biophysics lab with several physicists, including my PI. The culture in the lab really influenced my way of thinking. One day, or maybe it just seemed like one day, I was walking on campus to class daydreaming, and I realized that I wanted to study physics and apply its lessons to understand the brain and cognition. Clearly, I am still far from accomplishing that, but that really changed my trajectory.

Describe an aha moment you’ve had in the lab?
As a grad student realizing that synapses and neurons are not noisy because they are imperfect, but because they evolved to be that way. Noisy synaptic transmission and imperfect fidelity can be advantageous to neuronal computations.

What is one significant advance TDLC research has brought to the science of learning?
Since I’m new to TDLC, I’m not sure I’m the best person to answer that question. There are many excellent scientists working on so many important and quite diverse problems in TDLC.

What do you hope to accomplish in the next seven years?
As an individual and for my lab, I have many personal and professional goals, respectively. However, focusing on professional goals for the moment, I want to adapt and advance many of the optical tools we have been using in animal models to study the human brain and disease.

What is your favorite TDLC value?
The brain is a temporal machine. Much brain research ignores, or at least puts aside, time and temporal aspects of the brain because it is too complex. One of TDLC’s missions is to tackle this head on.

Matthew Shtrahman is a principal investigator in the Department of Neurosciences, studying spatiotemporal patterns of neuronal activity generated in the brain. He earned his MD and PhD at the University of Pittsburgh.