"Tell me and I forget, teach me and I may remember, involve me and I learn."

Educators have demonstrated the power of Benjamin Franklin’s famous quote. Learning from real-life experiences, also known as “experiential learning,” has been shown to be a very powerful tool for teaching.

The Temporal Dynamics of Learning Center (TDLC), positioned at the cutting edge of science and brain research, is in a key position to offer training to high school, undergraduate, and graduate students, especially those under-represented in science. A few of the associated programs include:

These programs are especially significant as our nation’s educators, scientists, and policy makers realize the need for improved STEM (science, technology, engineering, and mathematics) education for students, to improve our nation's competitiveness in technology development. Recruiting talented and enthusiastic students, and offering them training and experience, is critical for the continued success and growth of universities, and our country.

Illustration of a TDLC Internship

No where is the enthusiasm and talent of interns more evident than in TDLC Acting-Director Andrea Chiba’s lab. Her three summer interns – Robert Moore, Vivian Phillips, and Andrea Elser –  eagerly share details of their project.  The team is studying prosocial behavior (empathy) in rats. Vivian, a freshman neuroscience major from Agnus Scott College, explains: “We are attempting to replicate a study which found that rats will release another rat trapped in a restrainer, and will do so even if there is food available only to the free rat.” (Bartal, Decety and Mason, Science, 2011) 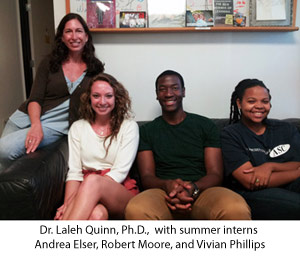 Unlike the initial study, this new study adds several elements. Robert, Andrea and Vivian take turns explaining: The rats will first be video taped in an open enriched environment in order to determine their social interactions and how those factors might influence whether or not the freerat will act altruistically.  Once they have a good measure of what causes the free rat to release the trapped rat, they will attempt to elicit the empathic response towards an artificial life form – iRAT – a navigating robotic rat.  This may involve iRAT emitting smells or sounds such as distress calls.

Fellow scientist, Dr. Laleh Quinn, Ph.D. -- faculty in the UCSD Department of Cognitive Science -- is leading the study and has been an invaluable mentor to the interns. She adds, “Ultimately we intend to record brain activity from regions thought to be involved in social behavior to more fully understand how the brain encodes empathy.”

The three interns talk in a fluent, interwoven way, with a seeming unspoken understanding of who will speak next. Their excitement, enthusiasm, and closeness is palpable, as they commiserate about some of the humorous/frustrating challenges they tackled, such as figuring out how to paint the backs of the rats so they could be identified in videotape. "They really learned how to trouble shoot and think about how to make these experiments work, and make them better,” Laleh shares. “I'm just amazed at how well they've done in two months. They work great together."

This cohesion and teamwork is especially impressive, in a group coming from such diverse backgrounds and interests. Robert Moore, a senior at Howard University, is a summer scholar on an HBCU grant from the Office of the President, who learned  about the internship through the UCSD Howard Pathways Project. He had no background in neuroscience, but comes from a family of teachers. In addition, his father, who works at the Howard University Medical School, encouraged him to explore the program. “I want to be a neurologist,” Robert shares. “I hope to have an M.D./Ph.D. degree – so the exposure to research was great. I wanted to find out where I should start.”

Vivian Phillips, a freshman at Agnus Scott College, showed an early interest in neuroscience. In 6th grade, she read a book called "A Mango-Shaped Space" about a 13-year-old girl living with synesthesia. From then on, she fell in love with the brain and the field of neuroscience, and became the co-president of her high school neuroscience club at The Bishops School. It also helped that her mother, Veronica Henson Phillips, heads the STARS program at UC San Diego and helped introduce her to Dr. Chiba’s lab.

Unlike Robert and Vivian, Andrea Elser’s connection with the Chiba lab came about more randomly. "I babysat for a neighbor who knows Dr. Chiba. My neighbor said, 'You are both named Andrea, you both went to Berkeley, you are both in Cog Sci, you should talk to her!" Andrea, a cognitive science major at UC Berkeley, contacted Dr. Chiba about internship opportunities, and the rest is history!

Internships are beneficial to students and to the universities that offer such programs.  For Vivian, Robert and Andrea, all agree that the experience has helped guide their future paths. They were able to take what they learn in class and apply it to real world situations. They were exposed to research protocols, coding, and trouble-shooting, and gained experience in the field to help them better determine what they like and dislike. They will also become published authors listed on any published paper about the project they participated in, and Robert presented a PowerPoint Presentation about their project at The UCSD Summer Research Conference. The internship experience gave them a chance to ‘try out’ the field, gain confidence in their own abilities, and discover innovative ways to overcome obstacles and determine future research areas they would like to explore.

"This internship experience has really helped me a lot,” Robert shared, “and I have met great people that love science as I do.” For Vivian, it helped to cement her dream of one day being able to run a lab like Dr. Chiba (“She is a Super Woman!”), to study brain disorders. “Science is definitely becoming merged with engineering and technology,” she adds, “so the coding I learned in the lab was really helpful for me. And I kind of got over my fear of rats, too!” For Andrea, the experience broadened her perspective. “I actually started off interested in people and mental illness. This internship is a stepping stone to see if I want to do research in the future."

An important part of a university internship experience is the ability to provide devoted, talented mentors such as Laleh, who has spent substantial time with Vivian, Robert and Andrea in the lab. Andrea Chiba shares, "The general scientific climate is so competitive these days that it is really wonderful that there are still high level research scientists like Laleh who are willing to slow down and devote large chunks of time towards teaching aspiring scientists the intricacies of research. It is a labor of love, not just for the students, but also for the future quality of the larger scientific community." 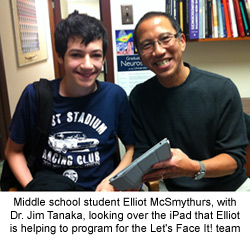 Summer internships like the program offered in Dr. Chiba's lab occur in many TDLC labs. In Jim Tanaka's Center for Autism Research, Technology and Education (CARTE), middle school student Elliot McSmythurs has joined their Let's Face It programming team. The TDLC-associated center examines the cognitive and neurophysiological processes underlying face recognition. Jim has recruited Elliot to help program software for the application and shares that, "He is doing some amazing things for us. Elliot happens to be on the autism spectrum so it is cool that he is helping code up software for other Autism Spectrum Disorder (ASD) kids. Elliot is a real whiz kid."

And in the UCSD Cognitive Developmental Lab, Gedeon Deak took on CSUSB student Vanessa Carlos through the UCSD STARS Program. During her eight-week internship, Vanessa began coding for the Gaze and Point project, and helped with both analysis and reliability.  "This experience helped me to further ground my determination in attending graduate school and achieving my Ph.D. in cognitive psychology,” she shared. “I greatly enjoyed my experience at UCSD and plan on applying there, as well as a wealth of other schools."

Another type of internship offered through TDLC is the Preuss Internship Program.  The Preuss School, jointly chartered by UC San Diego and the San Diego Unified School District, is a middle and high school dedicated to providing an intensive college preparatory education for motivated low-income students who will become the first in their families to graduate from college.  Preuss seniors who are interested in TDLC-related topics spend around 13 weeks assigned to a TDLC lab.  Gary Cottrell first hosted a Preuss intern in his lab in 2005, providing his student the opportunity to study neural networks.  Other TDLC investigators, including Andrea Chiba, Javier Movellan, and Gedeon Deak, have also hosted Preuss interns.

In addition to helping students, internships also benefit the universities that offer these programs. Students share enthusiasm, creativity and new viewpoints with the internship labs, and then they return to their schools eager to share their experiences in the field.  In the case of the interns in Andrea Chiba’s lab, all three seem invigorated and plan to continue their studies in neuroscience or cognitive science. In fact, several hope to apply to graduate programs at UC San Diego in the future. “I love this school!” Robert adds, “It's probably top three (in my choices).”

"They have been great,” mentor Laleh from Dr. Chiba’s lab candidly exclaims. “I don't know what I'm going to do without them!"  From the look on everyone's faces, the feeling is mutual.