This was a graduation like no other. During the week of February 8, 2016, the National Science Foundation (NSF) and its six Science of Learning Centers (SLCs) met in Washington D.C. to celebrate the extraordinary success of the SLC program. Funded for the past decade by the NSF, these pioneering Centers were created for the express purpose of deepening our understanding of learning.

The SLC program, in the form of six Centers*, has brought together top researchers to address questions and gaps in our knowledge of the process of learning. The majority of the Centers consist of researchers from multiple institutions and across diverse disciplines. For example, the Temporal Dynamics of Learning Center (TDLC) includes 18 partner institutions located in four countries (U.S., Canada, England, and Australia), and from various disciplines that include machine learning, neuroscience, biology, molecular genetics, psychology, robotics, mathematics, computer science, and biophysics.  This collaborative and interdisciplinary research model effectively and efficiently builds relationships between researchers, educators, students and the general public in order to generate new, transformational ideas. 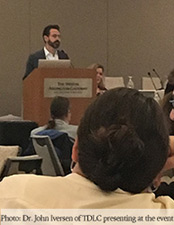 The SLCs are reaching a pivotal time, as the program nears the end of its funding. NSF, along with all six Centers, chose to celebrate its culmination by organizing a gathering to highlight the scientific, technological, and translational advances that have emerged. With the Center of Excellence for Learning in Education, Science and Technology (CELEST) taking the lead, and Directors from the other Centers providing help, the team organized the commencement.

The week was very dynamic. About a dozen investigators from each Center, along with trainees, presented their work, shared their latest findings and the lessons they have learned, and discussed what it means with respect to the future of the Science of Learning and for public policy. Also in attendance were NSF Program Managers, and in particular, Dr. Soo-Siang Lim, Program Director for the SLCs, who has been instrumental in guiding the Centers through the decade-long journey. 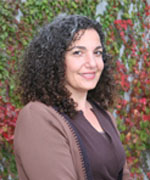 Dr. Andrea Chiba, Director of Science for the Temporal Dynamics of Learning Center (TDLC), attended the graduation. “It was wonderful,” Dr. Chiba shares, “because every single Center had beautiful science rolling out. Every Center had new exciting findings across a variety of areas, from very basic science and technology, to tutoring systems, and robots – even signing robots for young children to learn sign language.”  For her, a highpoint was seeing first-hand that the Centers worked. “I mean, it really actually worked! Every Center worked; In the early years, things seemed to be struggling along, but there was a dramatic difference at this point – good science takes time. In the end, there was very interesting, different science from every Center. Research that was integrative in nature, addressed different sorts of questions than are typically addressed, and that really focused on how people learn at every level of the system.”

“We all had very basic questions about learning,” she continues.  “What we ended up doing was extracting – from very different perspectives – some of the same principles. And what’s nice about it is there was no disagreement. And that is unusual in science.” She shares the example of early rapid sensory processing and the importance of input: “The LIFE Center showed the benefit of rhythmic training in babies, TDLC showed the benefits of early rapid auditory processing, and VL2 showed that this input need not be auditory, but can also work in the form of visual language.” The pioneering research coming out of the SLCs has had a profound effect on views about learning, and the NSF has proudly listed “Ten takeaways from ten years of the Science of Learning Centers.” 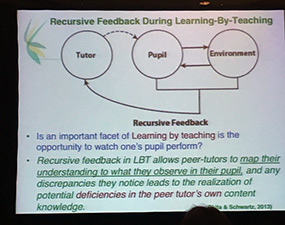 A unique aspect (and strength) of this Science of Learning research, as Dr. Chiba and many of the other Center leaders describe, is the fact that “we engage in sort of an ‘engineering process’ for learning environments that are not one-size-fits-all, but are iterative in their design.  We approach it from the science, we design it, and then we change it so that it works in each setting. Because we shouldn’t be generalizing from one population to the next. And we continue to feed empirical questions back into the science from the practical application.”

The meeting also clarified various needs: “One thing that became clear is that we should be synthesizing the research from the different Centers and there should be a mechanism for that.”  But Dr. Chiba acknowledges that these are large-scale ventures that would “require a different infrastructure and a larger rethinking of how we plan our education in the U.S. now that we have the capacity to do science in a very different way than we used to.”

Dr. Chiba was tasked with extracting practical considerations regarding the Science of Learning that policy-makers could take into account. She became painfully aware of one of the biggest challenges: The current lack of sustainable funds for the movement in the U.S.  One of the major accomplishments of the SLCs has been to train the next generation of researchers and leaders in the Science of Learning, so the current lack of funding is very discouraging. “We’ve cross-trained hundreds of brilliant trainees to be really excellent in this field, where we understood the workforce was needed to move forward for this interdisciplinary science,” Dr. Chiba shares.  “Many of them stopped doing their own brand of science in favor of doing extensive training in the Science of Learning. And then to not have a funding venue for them is very disheartening.”

What makes the situation especially frustrating is that Center Directors have travelled all over the world – to Paris, China, Australia, Singapore, Hong Kong, and Brazil – due to the world-wide interest in this new Science of Learning.  “And then, to not have the U.S. sustain what they started doesn’t feel very good for our community.” The OECD, based in Paris, however has demonstrated a sustained and growing interest in the Science of Learning.

The challenge in sustainability has not gone unnoticed. A “kick-off” dinner of sorts was held during the graduation week, organized by Daniel Leeds (Chair of the Alliance for Excellent Education), and attended by policy-makers including Roberto Rodriguez (Deputy Assistant to the President for Education) and former Governor Bob White (co-founder of the Alliance with Daniel Leeds).  The group discussed practical considerations for the Science of Learning with respect to policy now, the future of the research, and sustainability for the movement of the Science of Learning at large. More dinners (and funding!) will hopefully follow. It is moments like this when Dr. Chiba feels as if they are “gaining some traction” in the sustainability effort. 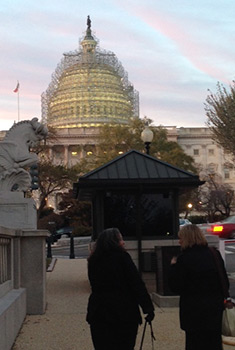 Dr. Chiba and other SLC members believe that what is needed is a stronger effort to promote the Science of Learning in the U.S. They hope that the Science of Learning becomes a research priority for the U.S. and for the Federal agencies. Dr. Chiba strongly believes that “if we can better understand how learning and development occur across the lifespan, it would ultimately be cost effective, for health, lifestyle and for education. “I think that there’s a difference between fixing things that are broken and getting things right at the outset … Having sustainable basic science programs that feed into large-scale translational work makes sense.”

The SLCs unanimously agree that they would like to continue; to be sustainable. They see the astonishing results coming out of this research and can’t imagine stopping now. They want to utilize the knowledge they have gained to answer new questions, create new studies, and take the science forward. Dr. Chiba gives an example: “When Jonas Salk invented the polio vaccine, he didn’t just stop there. He kept going, and he created this huge Institute to sustain his vision of interaction between biomedical science and basic research.”

While the NSF’s Science of Learning Center Program is sunsetting, one thing remains clear.  The members of the SLCs are not looking back; they are looking to the next sunrise, in whatever form that may be. They have seen what can be accomplished using a collaborative and interdisciplinary research model that has the potential to give us a deeper understanding of learning and to influence the future of education. For now, all eyes seem to be looking ahead.

* The Science of Learning Centers (SLCs) include:

** Congressional Briefings on the Science of Learning
On June 24, 2015, TDLC Co-Director Andrea Chiba and Project Scientist Alex Khalil traveled to Washington, D.C. to lead a Congressional Briefing on the Science of Learning, along with representatives from the five other Science of Learning Centers (SLCs) (View invite). Following that visit, TDLC received a visit from Congressional Staff on Sept. 2, 2015. Four members of Congressional Staff and a member of the National Science Foundation (NSF) toured various NSF-funded projects at UC San Diego. Drs. Chiba, Cottrell, Sejnowski, Poizner, Bartlett, Tallal, Forster, Khalil, Minces, and Snider participated in their tour of TDLC (click here for agenda). Other Science of Learning Directors Patricia Kuhl (University of Washington), Nora Newcombe (Temple University) and Barbara Shinn-Cunningham (Boston University) also presented results from their research in order to raise awareness of the importance of SLC work.

Due to the visit in September, Dr. Paula Tallal was invited to testify before the Committee on Science, Space and Technology for the U.S. House of Representatives on H.R. Bill 3033, the READ Act. In her oral and written reports, she highlighted the Science of Learning Centers (SLCs), specifically suggesting that NSF develop mechanisms to capitalize on the advances from the SLCs.