TDLC and Mozart & the Mind

What is the effect of music on the brain?
And how can we develop an event that adequately explores this complex topic?

Drs. Tim Mullen (former TDLC cognitive neuroscientist) and Grace Leslie (musician/cognitive scientist) spent weeks in 2011 brainstorming these questions. Following a series of conversations with Nancy Laturno Bojanic and Priscilla Hall from San Diego classical arts organization Mainly Mozart, they sought to create an event where scientists, musicians, artists and the general public could interact. Where leading scientists could share their latest music-brain research, the public could interact with cutting-edge, biologically-inspired art installations and technology, and where music appreciators could listen to classical musicians perform live -- all in one evening. (Note: Tim Mullen is now CEO & Research Director of Intheon).

They came up with a one-day pilot event called "Mozart & the Mind (MATM)" which premiered May 19, 2012. This featured a lecture on music and the brain by neurobiologist Aniruddh Patel interspersed with performance by cellist Ronald Thomas. This was preceded by an interactive brain-music exposition, which also featured real-time 3D visualization of the brain activity of acclaimed pianist and composer, Stephen Prutsman, as he improvised on the piano. Following the success of this pilot event, Tim Mullen and the team at Mainly Mozart developed an expanded annual series, consisting of six events over three weekends filled with interactivity, science, and music pairing MATM music-brain presentations with interactive expositions and six world-class Spotlight concerts. Held in the auditorium at The Scripps Research Institute, the series put performance and science together on the same stage, pairing lectures and demonstrations by neuroscientists, therapists and musicians, with cutting-edge technology and chamber music performances. Each of six nights was filled with science, interactivity, and music. "We wanted to create a conversation," Tim explains, "…to increase public recognition of the importance of music to health and neuroscience. The event is an opportunity to engage a broader audience in both the appreciation of music, and its connection with brain-science." 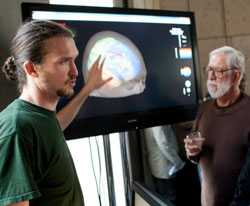 Music-Brain Research
Tim Mullen believes that we are living in a very exciting time for music-brain research, given the development of powerful computers that are able to model brain function, and highly sophisticated instruments that can now track what goes on in the brain in real time. "It seems there's a real possibility, perhaps in our lifetimes, to actually understand how many of these processes (in the brain) work." He continues, "Our sense of time and rhythm is central to human interaction. The latest research seems to show that practicing music can help us in many other areas of life."

Recent studies are showing the positive effect of music on health, brain function, learning and aging, and the MATM lectures explored these relationships.In a dramatic video during TDLC scientist John Iversen's presentation, the audience watched a woman who was barely able to shuffle her feet due to Parkinson's Disease. As music began to play, her entire demeanor changed and her walking became more fluid and with longer strides - giving the audience an outward glimpse of the enormous power of music. The MATM series offered many novel insights into the diverse ways music impacts the brain and behavior, and illuminated scientific advances in the field, as well as highlighting how much we still have to learn.


TDLC researchers form a big part of MATM. While TDLC researcher, Tim Mullen, took the role of Artistic Partner for MATM, Alex Khalil and Victor Minces addressed the role of musical training in improving focus and treating attention disorders, and concluded their talk with a Gamelan performance by the Giri Nata ensemble. Scott Makeig, founding director of the Swartz Center for Computational Neuroscience at UCSD, with Grace Leslie, showed new research using full-body motion capture and mobile brain imaging to explore how musical pulse conveys feeling. And TDLC scientist John Iversen (with Aniruddh D. Patel from Tufts University, and percussionist Aiyun Huang) explored topics such as the neurobiology of musical rhythm, the interplay of music and memory, and the influence of music on early brain development and in restoring brain function.

Other scientists such as Nina Kraus (Hugh Knowles Professor at Northwestern University) and Adam Gazzaley (founding director of the Neuroscience Imaging Center at UC San Francisco) discussed how aging impacts hearing, memory and brain function as well as music's role in toning the brain for auditory and cognitive fitness throughout life. Barbara Reuer discussed the power of music to heal, maintain health and transform lives, including those diagnosed with neurological disorders and diseases such as autism, Alzheimer's, and Parkinson's.

The series also touched on how advances in cognitive neuroscience could open new possibilities for musical expression. "A central goal of cognitive neuroscience is to better understand the neural mechanisms underlying cognition and emotion -- which includes our ability as humans to experience and create music," Tim explains. "As we learn more about these relationships between the brain and music and emotion, we can combine this knowledge with advances in neurotechnology to create new possibilities for musical expression and artistic representation." 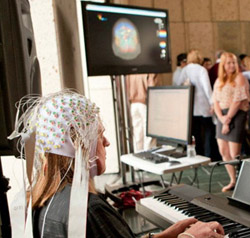 What better way to connect science with music, than to let the audience experience first-hand how the brain relates to music perception, rhythm and composition? After the night's lecture, audience members could explore innovative installations that experience the brain/music connection in a Free Interactive Music & the Brain Exposition. They could watch 3D models of their brain activity, have MoodMixer compose new music based on their cognitive/emotional state, and strap on wearable brain imaging technology to explore 3D models of their brain activity superimposed on detailed brain anatomy. "In this way," Tim continues, "attendees could experience for themselves, in a fun and engaging way, some of the novel technology and scientific methods being used to study the brain and emotion and cognition, and share researchers' excitement and investment in the scientific process—a process that often requires years of patient work to perfect before society can appreciate the end result, for instance in the form of novel technologies, or medical treatments."


Overall Goal of MATM
Tim hopes the now-annual MATM series will create a conversation between scientists, musicians, and people in their every-day life. He envisions forming a bridge between the sciences and music/art—where the two can find a common ground. "We don't want to 'dumb-down' the science," he explains. "We want to make cutting-edge science more accessible to everyone." He concludes, "Our goal in MATM is to enhance appreciation for the important roles both music and science play in our daily lives. Music is so ubiquitous; and anyone who's been moved by music understands, intuitively, that music has a powerful effect on brain and behavior. As such, music represents a perfect vehicle to connect people to scientists seeking to better understand cognition, emotion, and behavior."

History of Mainly Mozart's "Mozart & the Mind" Series|
Mainly Mozart has produced classical music for the past 25 years. The organization coordinates the largest Summer music festival in the region (The San Diego Mainly Mozart Festival), provides music programs to over 20,000 children annually in San Diego schools (and in Tijuana, Mexico), and has partnerships that serve autistic children, as well as people with Alzheimer's disease and Parkinson's disease.

Nancy Laturno Bojanic, Executive Director of Mainly Mozart, reached out to Tim Mullen and others at UC San Diego. She was interested in exploring the music-brain connection, and asked Tim Mullen and Grace Leslie if they could organize an event that connected music to cognitive neuroscience and psychology. A one-day Mozart & the Mind pilot event was organized in 2012 at The Neurosciences Institute. That event was so successful that it evolved into a six series program covering a range of topics, with the number of people interested in participating increasing yearly.