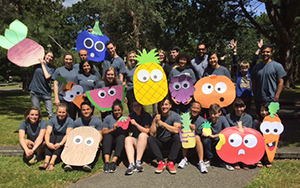 Free, fun and educational, Face Camp is an innovative concept that combines educational outreach with basic science. Conducted at the University of Victoria in British Columbia, Face Camp is a free, one day workshop where typically developing and special needs children learn about the "science, art, and fun" of human face recognition.

Face Camp is composed of typically developing children and children with special needs (autism, physical handicaps) and of all abilities ages 5-12 years. The camps have been a bona fide success with nearly 1,000 children attending the event over the last eight years.

In June 2016, for example, 124 children, including 23 children with special needs, attended this summer’s Fruits & Vegetable themed camp. According to the survey results, the children had a great time at the Fruits & Vegetables Camp and rated all of the activities as “very fun” to “extremely fun."

Face Camp and Dr. Jim Tanaka Recognized in the News! 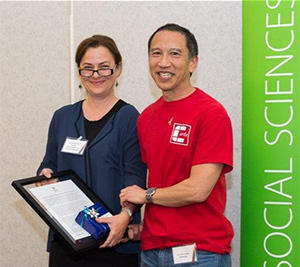 Face Camp and CARTe have been featured on CNN.com, Globe and Mail and TEDx. CARTe publishes a semi-yearly newsletter “Different Minds.” This summer the Different Minds Lab will once again help sponsor the Autism’s Own Conference that highlight the creative and intellectual achievements of university students and community members who are on the autism spectrum. The event received broad local media coverage and was attended by over 200 people from the Victoria community. For his work, Dr. Tanaka received the 2016 Award for Outstanding Community Service Award by the Faculty of Social Science, University of Victoria and the University’s 2016 Award for Excellence in Research-Inspired Teaching.

History of Face Camp
Jim Tanaka, one of the founding PIs of the Perceptual Expertise Network who works at the University of Victoria (British Columbia, Canada), has created a unique research science translation event, Face Camp. Face Camp is an opportunity for children to learn about the science and technology of face processing, and an opportunity for researchers to run experiments as part of the camp experience. However, since its inception in 2003, Face Camp has become much more than that. With the strong support of the TDLC, Face Camp expanded in 2008 to include special needs children including children on the autism spectrum.

Dr. Tanaka is the founder and co-Director of the Center for Autism Research, Technology and Education (CARTE), and has partnered with TDLC scientists to develop and harness new technologies to help people with autism to improve their social and emotional skills. Face Camp has served as testbed for these technologies. For example, in one of the Face Camps, children learned to produce and discriminate facial expressions using the Computer Expression Recognition Toolbox (CERT), which was developed by TDLC’s Machine Perception Lab.