TDLC’s April Benasich at Rutgers University and her colleagues use electroencephalographic recording to test a baby's ability to process sounds. Their research suggests that the way infants only a few months old process sound in their brains is highly predictive of later language development in normally developing children as well as children at risk for language disorders. Their data further suggests that measures of rapid auditory processing (RAP) ability may be used to identify and more importantly allow early remediation of infants at highest risk of language delay and impairment.

Most of the timing cues involved in speech perception occur in a time scale of tens to hundreds of milliseconds. Ongoing analysis of these timing cues by the infant brain allows language maps to be constructed and promotes automatic processing of native language.

The Benasich lab studies infant brain waves as they process these critical timing cues for indications as to how well and in which parts of the brain this mapping process is occurring. Another way to examine how the infant
brain is handling this important task is to examine brain oscillations within the child’s ERP. Oscillations capture how brain cells within and across brain areas are talking to and cooperating with each other. This process is what is referred to as “neural dynamics”. In the preliminary data presented at TDLC, Silvia Ortiz-Mantilla, M.D. and Gabriella Musaccchia, Ph.D. demonstrated how the Benasich lab is examining neural dynamics over different time scales during speech and non-speech processing in infants.

Ongoing research in the Benasich lab has also been evaluating the outcome of a 6-week prototype behavioral intervention that was administered starting at 4 months of age, a time of exquisite sensitivity to the external sound environment.  Preliminary analysis of pre and post-test EEG/ERP suggests that processing of ongoing rapid, sequential acoustic information in non-speech and speech can be optimized and sharpened in typically developing infants with no risk of language disorders. A study of the impact of this intervention on infants with a family history of language disorders (who have a much higher incidence of themselves developing language difficulties) is now underway.

Impact/benefit:
The researchers hope to use these new as yet unpublished findings to refine a behavioral infant intervention those aim is to forestall (or prevent?) early language deficiencies by helping infants build more accurate language maps during this criticalperiod. Across the first year infants are assembling these critical pre-language soundmaps, thus it is possible to gently guide the young brain to set up the most optimal mapping of the sounds of language. 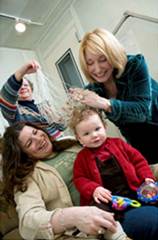 Explanation:
Dr. April Benasich and her team are at the forefront of research in using brain-recording techniques such as the EEG to understand the basic processes that underlie learning. A thinking cap records electrical signals from the brain of children as young as a few months old, to determine how they are processing the non-speech and speech sounds upon which language is constructed. Thus across development the processes that make up the building blocks of language can be observed and tracked. Importantly it appears that this process may also be shaped behaviorally to produce more accurate and automatic language maps.