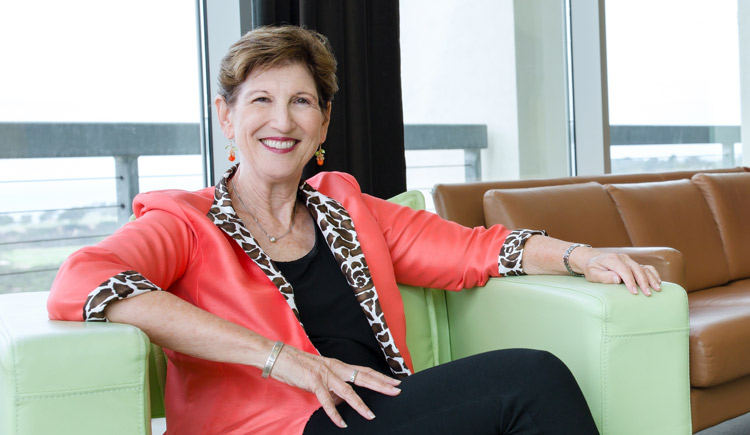 Where were you born and raised?
Dallas, Texas

What is the one piece of advice you would give your younger self?
Rather than telling the same old childhood story over and over to yourself and others, revise and update it regularly, focusing on the positive, personal successes you have achieved along the way and your goals for the future.

Describe the moment when you knew you had to go into science
I was an art history major at NYU, and I needed to work. I lived near Rockefeller University, and asked if they had any jobs. I ended up in Neil Miller's lab, working every weekend to help the people in the lab so they didn't have to come in. I was all by myself, running around with stopwatches around my neck, putting in food or weighing animals at various times. Turned out, I was good at it, and they invited me to work there during the week.

Later, I got a job at Kings County Hospital on the aphasia ward. The thought that you could have a stroke one day and lose your ability to talk; I couldn't think of anything worse. I had no idea that could happen.

Between these two experiences, I realized I didn't want to be an art history major, I wanted to do science.

Describe an aha moment you've had in the lab
As a graduate student, I was working with children with impaired language development and discovered they were not able to process auditory tone sequences as fast as children with normal development. The deficit occurred when stimuli were presented quickly, in succession, with only tens of milliseconds between them.

Then I read a paper that showed many syllables differed by acoustic cues that only lasted tens of milliseconds. My a-ha moment was realizing these children's speech and language problems might stem from this auditory processing deficit, rather than a linguistic deficit. I also realized it might be possible to remediate language problems by using computer synthesis to stretch out the fastest acoustic changes.

These discoveries led to a new approach for children with autism, CAPD, ADHD, dyslexia and other disorders that affect language and reading. This approach focused on improving their processing speed, as well as providing computer-modified speech signals to slow down the fastest acoustic changes. Subsequent research has shown that a similar method can be used to rapidly teach English as a second language. This intervention, called Fast ForWord™, has been used in 55 countries and has helped more than three million children improve their language skills.

What do you hope to accomplish in the next seven years?
I am in the process of retiring from active scientific work. I hope to continue to disseminate the knowledge I have gained over my 45-year career to younger scientists, clinicians and teachers.

What is your favorite TDLC value?
Open discussion, collegial collaboration and ongoing support. Equality of ideas and contributions across generations, genders and scientific fields.


Paula Tallal, PhD, is senior research scientist at the Center for Human Development, UC San Diego. She received her bachelor’s from New York University and her PhD in Experimental Psychology at Cambridge University, England.

Dr. Tallal has led multidisciplinary research teams studying the neurobiological basis of speech, language and reading development and disorders. She has published more than 200 scientific papers and reviews.