Impact/benefits: As the Science of Learning Centers (SLC) program sunsets in 2016, we want to encourage elected officials, Congressional committee members, and agency leadership to continue support for this type of research, training and translation programming in the future. The National Science Foundation's initial investment in this group of researchers and students/trainees has grown beyond expectation, has yielded tremendous scientific breakthroughs and benefits, and it is important to continue and build upon this success! In addition, the outcomes of the initial research are changing the way we think about education, and have led to several international collaborations as other countries begin to set up their own science of learning centers based on the U.S. model. Members of Congress are much more likely to support research, training and translation programs and initiatives if they understand how it benefits people, communities, and the economy.

Explanation: In June 24, 2015, TDLC Co-Director Andrea Chiba and Project Scientist Alex Khalil traveled to Washington, D.C. to lead a Congressional Briefing on the Science of Learning, along with representatives from the five other Science of Learning Centers (SLCs) (View invite). Following that visit, TDLC received a visit from Congressional Staff on Sept. 2, 2015. Four members of Congressional Staff and a member of the National Science Foundation (NSF) toured various NSF-funded projects at UC San Diego. Drs. Chiba, Cottrell, Sejnowski, Poizner, Bartlett, Tallal, Forster, Khalil, Minces, and Snider participated in their tour of TDLC (click here for agenda). Other Science of Learning Directors Patricia Kuhl (University of Washington), Nora Newcombe (Temple University) and Barbara Shinn-Cunningham (Boston University) also presented results from their research in order to raise awareness of the importance of SLC work.

Due to the visit in September, Dr. Paula Tallal was invited to testify before the Committee on Science, Space and Technology for the U.S. House of Representatives on H.R. Bill 3033, the READ Act. In her oral and written reports, she highlighted the Science of Learning Centers (SLCs), specifically suggesting that NSF develop mechanisms to capitalize on the advances from the SLCs.  (Video of testimony, Dr. Tallal begins at 1 hr 32 min mark). 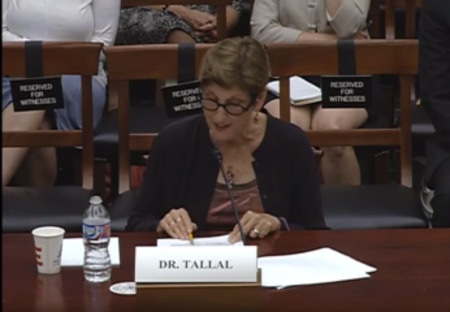